Today I got up and hit it again. I have a bunch of grass that I planted that died. It is all around where I built. I also filled in a bunch of dead spots in the yard. Well... right after I planted that grass we got rain every day for weeks. Hence the floods here. Well the grass grew like crazy. Then one day I looked and it was all dead. It never really took roots since it was so wet. What is worse, the spots that I had filled in came in really strong and now there are dead spots all around the yard. So I dug up all the dirt and replanted it today. I cleaned some more of the carsiding on the deck and that is ready to seal up tomorrow. I used oxygen bleach and it really took off the crud. Mary went to Fareway yesterday and got steaks. There was some confusion about what she wanted, I guess because she came back with 4 steaks that weighed over five pounds. So $40 later I was grilling up some of the nicest steaks you ever saw. After dinner I went fishin' and did not catch much. It was still nice. Then I sat on the porch and watched the sunset. I should have taken the picture sooner, but you get the idea... 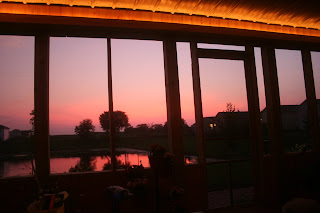 -here is a video of the ZR1 vette's run at Nurburgring sync'd up with the Viper ACR. Both boast over 600 hp and it was a pretty close battle. VIDEO
Posted by brent at 8:26 PM No comments:

Spend the day doing odd jobs. Washed a car, sanded a rail, scrubbed the carsiding on the side of the 2nd deck, went fishin', mowed the yard, took a nap, played some Gears of War on the Xbox. A good day all around. I put some Oxygen bleach on the pine carsiding and then power washed it off and that really took off the uglies. I am going to try to seal it up tomorrow.
-HERE is a table saw with a granite top. A bit over the top, but pretty cool. I would rather have the riving knife then the top.
Posted by brent at 9:11 PM 1 comment: 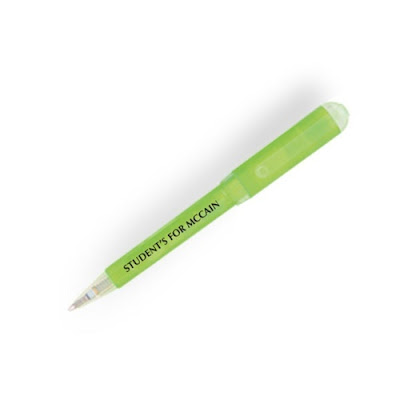 -This pen is for sale (at least right now) on John McCain's official website. I am not the grammar police, but I just thought it was funny they are promoting students for McCain and they gorfed the use of the apostrophe.

-Steve Jobs must have been bummed when he read the news today. Turns out he is dead. That is no way to start the day at all. Somebody is looking for a job right now.
Posted by brent at 3:00 PM 1 comment:

I got crazy and bought a fishin' rig today. I spent most of the day down by the pond and in the boat catchin' fish. Mostly small bluegill. I went out after dinner and the bluegill were hitting on almost every cast, so I switched over and went for some of the bigger bass from the boat. That was really relaxing. I can see why people get into this stuff.

I went in to work at 05:00 today and left at 11:00. When I got home I found out that the neighbors had shown up early to drag the pond. I had to wire up the second strainer thing I made and I was out helping by 13:00. We got a lot of it out. If the wind were only blowing more pushing it over, we would have gotten all of it. But it is much better and I was really impressed with the turn out. The pictures are small so click on them if you wanna see them bigger. I did a cheezy photoshop crop job because I am tired. Good night :-)

And I thought he was such a nice young man :-)


Here a bunch of great mods to Mac mini's.
Posted by brent at 6:04 PM No comments:

Leno knows cars. He has one of the most impressive collections of cars in the world. But the reason I respect him is because he understands and appreciates all of them. He does not just buy them because he can and because it is cool. Anyhow, here is what he had to say about the US auto makers.
Posted by brent at 7:46 PM No comments:

The University of Iowa made a list on Forbes!!!

The most overpaid coach is Iowa’s Kirk Ferentz, who made $3.4 million last year despite lackluster results on the field, for a score of 71. Just how lopsided is Ferentz’s deal? During the last three years he’s pocketed $10 million, including a record $4.7 million in 2006, but has led the Hawkeyes to just a 19-18 record.
Posted by brent at 6:50 PM No comments:

Well that weekend went by fast. I think that I am pretty much done with the deck. I got the trim pieces up inside and the lights behind them. They cast a nice indirect glow up on the ceiling at night. I took a picture of them but it is not that good because I am just too lazy to get the tripod. I cut some flashing in half and put in along the inside to reflect the light up. It kind of evens out the light also so you have a long consistent glow instead of a bunch of little lights that the rope lights put out. I am going to replace the ugly mason jar looking light fixture today and then about all that is left is to put in some screening under the overhang so the birds and bees don't make refuge in there. I told Tim last night that I thought I wasabout done and he said, "what about the ceiling fan?". *AARG* I forgot about that. I need to clean off the bricks and then look into putting some sealer or something on them if that will keep them darker. (click on picture to see bigger version (as always)) 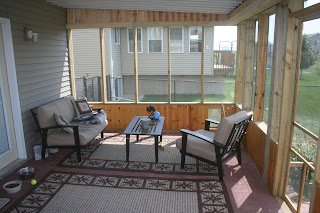 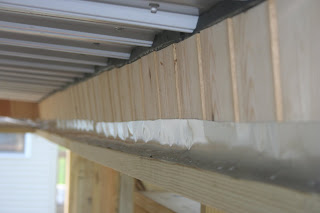 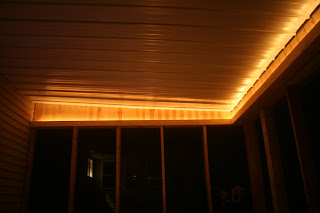 The kids are finishing up their first day of their senior year. That is just wrong. Wrong I say. Tim is driving them to school this year, so that saves me a trip (sometimes 2) in the middle of the afternoon to pick them up. It is still wrong though.

HERE is what you get when you take a pretty cool dad, some really cute kids, and a Mac. Most impressive, indeed.
Posted by brent at 9:39 PM No comments:

We are in trouble..

I don't know if this video is real or not. I am pretty sure you will hear a lot about it in the coming days and the truth will come out. If it is indeed real then somebody is going to get a visit from the cops.
Rejected Olympic Sport: Toddler Tossing - Watch more free videos

I see that the guy that was bathing in the dish sink at Burger King got fired. The sad part is he is thrilled about it because he is not getting his 15 min. It just sad that he is getting interviewed on TV and such like he is somehow a hero. 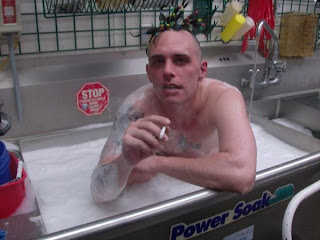 Now for a link to somebody who actually has skills and has contributed something. HERE is a fun collection of stuff from Niki. Niki likes to tinker.
Posted by brent at 5:39 PM No comments:

I posted a link to the story about the guy that took his life by yanking his head own head off. I guess that it was not an original idea. HERE. Don't know why I shared that, but I did.

-This also sounds morbid, but it really is not. It is a site of who is alive and who is dead. It is kind of interesting to go through old shows.

-Here is a 60 foot wide (I am guessing) BSOD projected in front of how many millions of folks around the world at the Olympics. What a proud MS moment that is :-)
Posted by brent at 9:30 PM No comments:

I am almost done with the deck! If things go well tomorrow I should finish up the vinyl siding on the top part of it.

I took time out today to mow the yard. Then I did my neighbors yard. They have been at Sturgis for the last week and were getting home today. I was sure that after a week of Sturgis and the drive home that they were in no mood to mow the yard.

I noticed something today. A couple in the neighborhood has a Ford hybrid SUV thing. Fine. But it is that fugly green color. That makes me think that they are not driving it because they think they can save the planet or even that it will save them money. But rather they got the fugly green color so that everyone will know that they are driving a hybrid and they are better then the rest of us. Or else they just have really bad taste.

-THIS is the most bizarre and sad thing I have read in a long time. Business man splits with wife and so he ties a rope around a tree and the other end around his neck then goes speeding off in his car.

-Don't get me wrong, I love the iPhone. I would have one if I could justify spending that much money on a phone. I would have it because it is cool. Not the kind of cool like "Look at me, I drive a hybrid and I am better then you" but rather the kind of cool that you just kind of look at it and enjoy and appreciate all that it does. Not to mention how well it does it. But some get it because they want everyone to know that they can spend that much on a phone. So some guy has the idea to cash in on those folks and make an app for the iPhone that costs $9,999. The kicker is that all the app does is display a red glowing gem on the screen so that you can prove to people that you have so damn much money you can waste it. EIGHT (!) people bought it before Apple pulled it from the store. STORY
Posted by brent at 6:55 PM No comments:

Well, folks, we made it!
I got the yard mowed (HOT!) and got the last of the screening done on the porch. WEE!

I am starting a Minnesota tag because so much stupid stuff happens there and also as a bonus Stove lives there :-)
Minnesota: A state DOT worker who skipped out when the big bridge disaster happened and billed the state for some unauthorized travel is now working for.....Homeland Security. I feel better already.

FARK had a link to this 3D paintings in a parking garage.

I have been watching XGames this week. Reminded me of this video from that nutty guy named Travis.
Posted by brent at 2:19 PM 1 comment: