airplane is 30 years old. Crap that makes me even older.

This is kind of hard to watch, but you will anyway.
**
THIS is fun to watch and you deserve it if you made it all the way through that last video.
Posted by brent at 9:19 PM 17 comments:

WOW. It has been more then a month since I posted here. I guess I have just been putting stuff on FB.
We got some hail for a min or so today, but nothing to worry about.
**
I was reading an article in Wired about why Flash sucks and thought it was funny that Adobe says that Flash does not drain batteries. I know when I run Flash apps my fan kicks on high and the battery does not last long. I also read this blog post from Steve Jobs that told his side of why they don't support it.
So I got done reading and I had 2:15 left on the battery. I launched Country Living and all of a sudden (2 min later) I have less then an hour. 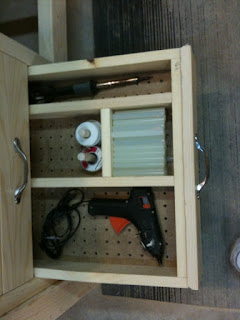 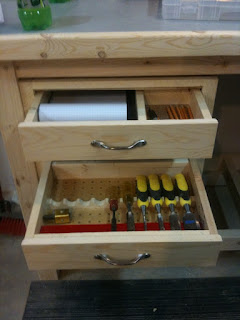 What a great day. It was about 50 and sunny. I washed 2 cars and a truck and defrosted the freezer in the garage and moved it to a better place (closer to the door)
I got the tool cabinet finished and put under my bench. That worked out really well. I want to make 2 more cabinets to fit under there, but I need to make something for the house first. Otherwise it just looks bad. I started using pegboard for the bottom of drawers in the shop a while back. It works well because you can put dividers into them and put small 3/4" screws from the bottom and hold them in place. It is quick and easy, and you can move the dividers when your needs change.
**
I really liked these five second films.
Posted by brent at 8:19 PM 8 comments: 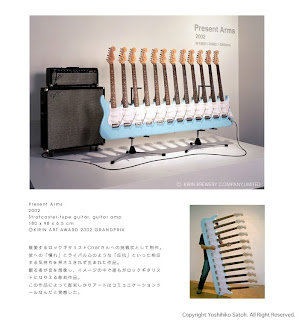 I have heard that when Rick Nelson had his five neck guitars made he did it to end the multi-neck-guitar-wars. Sorry, Rick.. it is still on.
Posted by brent at 5:00 PM 4 comments:

I had the day off and started to build a cabinet that will go above the toilet in the kids' bathroom. We painted yesterday and replaced fixtures and stuff. It looks much better in there. I have to get some oak to make the doors tomorrow.
**
Here is my favorite commercial right now.
Posted by brent at 6:13 PM 2 comments:

Here is what the shop looks like these days. (Click on any of the images to make them bigger.)
This is the switching on one of the blast gates that activates the dust collector when one of them is opened. The micro switch activates a 30amp relay that I salvaged off of an A/C unit. 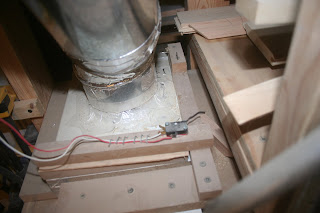 The top of the router table. The hole behind the router sucks chips from the fence into the cabinet and out to the dust collector. That really worked out well. 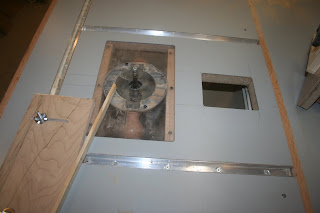 The top and front of the router table with the fence installed. 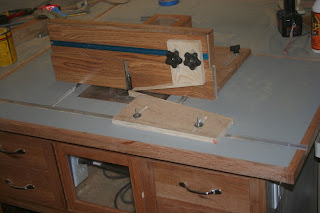 This is at the end of the outfeed table of for the table saw. There are air nailers and staplers in the drawers along with the bullets for each. 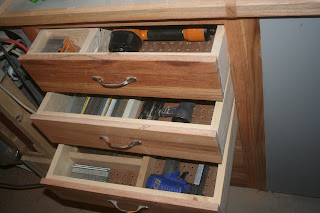 This is around the corner on the out feed table. There are sanders on the shelf to the right. The top of the outfeed table is plumbed up to the dust collector and will be a down draft table as soon as I get around to drilling a few hundred holes in it. I was not in a hurry before because the filter in my dust collector sucked and it would just blow fine dust through it anyway. 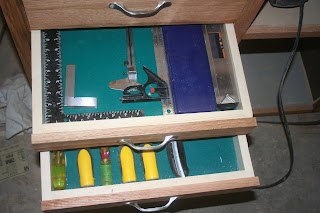 The bench on the left was built for that space. The one on the right used to be a downdraft table at the other shop and is going to stay there until it gets replaced with something that fits better and is more functional. 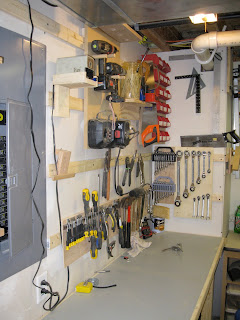 My saw. Love that beast. I wanted to move the rail to the right for years, and finally got around to ordering a new self sticking measuring tape to put on it after it was moved. I went to peel off the old one and then and only then did I realize that it was metal and I could just re-stick in on the rail. (duh) I used the tape I bought on my miter saw so it was all good. 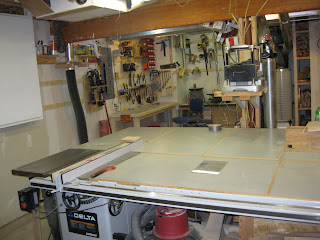 Here is the hillbilly cyclone. It started as a 35 gallon drum. There is a HF 2 hp (yea, right) motor and impeller on top of it. I just recently added the Wynn filter. I was not sure how much stuff would get through the cyclone, so I made a collection box below it. When I tested it out I dumped out all of the dust from the collector on the floor (it was about 2/3 full) and swept it into the floor sweep. Then I checked the white box below the filter. There was not a single bit of wood in there. Well that was just dumb luck, but I will take it. I got the blue barrel below the cyclone at university surplus with a lid and a hose attached. They gave it to me free since they "lost" the rest of the dust collector that came with it. 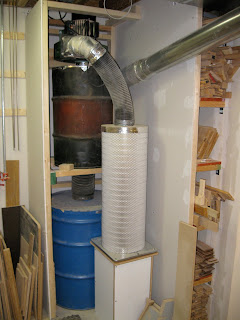 Just another shot of the router table I guess. 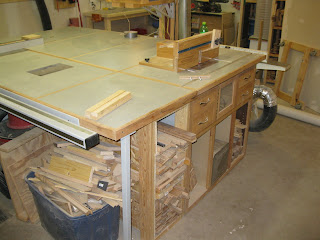 The miter saw and drill press. the extension on the right of the saw hinges down so I can stow 4x8 sheets behind it. The cabinet that the miter saw sits on is open below the saw. It sits on a couple of rails inside the cabinet. There is a trash can inside the cabinet below. The heavy dust just falls down into the trash can and the finer stuff gets sucked up to the top mounted dust collector port. I like this setup because it seems to work well, but also because then I can just toss cut-offs behind the saw and they go into the trash below. 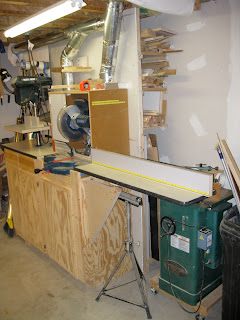 Here is where the downdraft table will be. The planer is there for now, but I have a better solution down the road. 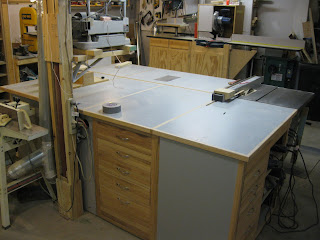 This is a bench I just finished up. The legs are 3x3 pine (glued 2x4's). It is all made of 2x4, but the joints are pinned mortise and tenons and I was happy with the results. I am going to make some cabinets for below it that will have drawers and perhaps some shelves. 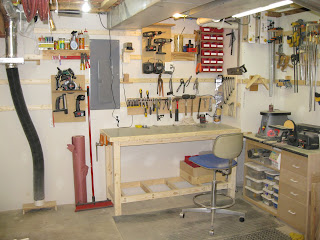 The last 2 photos are of the hillbilly cyclone being made last summer. The one photo shows an old shirt that was cut up to make a funnel shape inside of the drum. That was then fiberglassed and sanded to make it as smooth as I could with my limited fiberglassing skills. 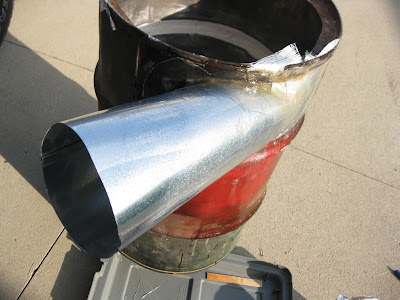 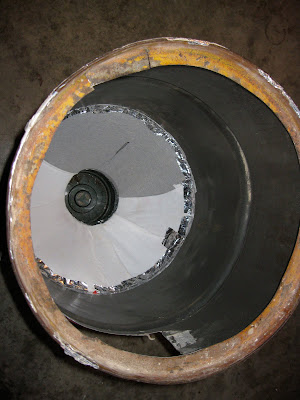 So there you have it. When I had my old shop I wished that I had built it bigger. My space is smaller now, but I am so glad that we moved out of the old neighborhood. I guess that no matter how big your shop is, you probably wish it were bigger. So I just look at it as a challenge to make things fit and to do the best with what I have.
There will always be more tools to buy, but the only big one I have left is a good bandsaw. I really want one of the Griz' saws and perhaps some day...
Posted by brent at 1:59 PM 1 comment:

Well this is the coolest case for your Macbook ever..
**
Here is the coolest cave you have never seen.
**
Wow, Heidi Montag sold over SIX HUNDRED copes of her new single in just the first week.
Posted by brent at 6:20 PM No comments:

Well this is truly amazing. If nobody told you that it was CG, you would never know it.
Posted by brent at 6:53 PM No comments: