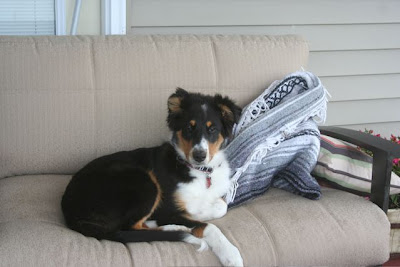 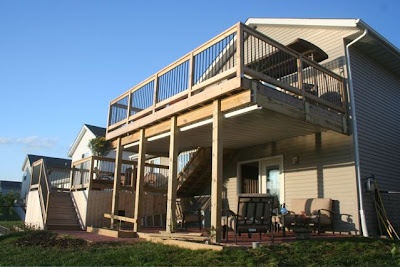 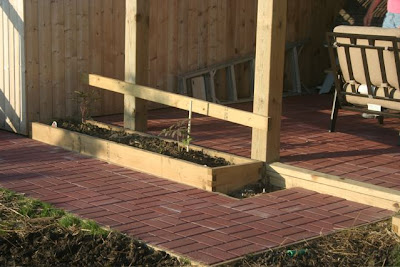 I had to work today and when I got off, I really did not feel like doing much. Here are some photos of what has gone on so far. There is a new walkway from the 2nd deck to the lower patio. There is steel under the top deck to keep the patio dry. And a photo of Crosby sitting on the new furniture for the lower patio. He thinks that we bought it for him. Tomorrow I hope to get the wood to start framing in the lower patio and screen it in. On the side of the house is a big pile of dirt that I dumped there and it looks really bad. I might try to load it into the truck and haul it out if it stays dry. It has been raining every day and up until now it was a pile of mud. HERE are all of the photos of the project so far. BTW... Yes, Stove, those are box joints on the flower boxes. :-) Also: the 2x4 that is between the posts is just there to keep the dog from running through the flowers until the wall is built.
Posted by brent at 9:03 PM 1 comment:

Today I got most of the steel up under the deck. I should be able to finish it tomorrow. Tomorrow is my last day of vacation :-( I did not get as much done as I wanted, but that is how it goes. If I had to do it again, I would have done some stuff different and it would take about 1/4th of the time. That is how we learn, I guess. It rained hard for a while today and the part that was covered stayed totally dry. That is cool.
Posted by brent at 10:44 PM 1 comment:

Today I got the walkway in from the second deck down to the patio below the third deck. Tomorrow I got started on putting up the framing to hold the steel that will go under the top deck to keep the patio dry. Hopefully I will get that done tomorrow.
Last night we had quite a bit of wind, but we are all fine. It was only here for about 10 min, but it took out the power for a couple of hours. Our neighbors lost some fascia boards and some limbs are down, but nothing bad.

This is really cool. It is the Vietnam wall online. You can zoom in and click on a name and see some info about them.
Thank you, Vet's.
Posted by brent at 11:09 PM 1 comment:

Worked on the new walkway today. Got it done. Tomorrow I tear it out and reset it because I am not happy with it. That will only take about an hour and it is one of those things I would keep looking at every time I am out there.

-THIS GUY on "you think you can dance" was pretty funny.
Posted by brent at 10:45 PM No comments:

I got to start my vacation early. Whoot!

In case you wonder where your money is going when you pay $60 to fill up your car, here is a video of what you are paying for. I know, not all of it goes to them. There are plenty of fat bastards over here getting rich off of it too. LINK IN CASE VIDEO DOES NOT LOAD

Did You Know: Dubai And Our Gas Dollars - Watch more free videos

THE EMPIRE STRIKES BARACK is a pretty amusing little film.

THIS GUY is too funny. The picturez is mines!
Posted by brent at 2:46 PM No comments:

I saw another video by this guy about a year ago. This one is even more impressive.

We went by the vet's office today. We still owe $270 for them killing.. I mean .. treating our dog. We have already paid over $500. Mary wrote them a letter telling them that we were not going to pay the rest because they mis-diagnosed our dog. My biggest problem with the whole deal is that they gave him his normal shots when he was in there. Mary asked him if that was okay to do and he said that it was. Later when we found out what he had, she looked it up and found out that was the worst thing you could do. When Bentley was dying I asked the vet if that was part of the problem. I knew he could not admit it, but wanted to see what he said. He said, "it probably could have had something to do with it". I took that to mean "yea, I screwed up but I can't admit it so I will put in a bunch of qualifiers in my statement". Dr. Douchbag called Mary at work and she tried to talk to him about it. He took a really snotty tone with her and she hung up on him. She was still upset about losing Bentley and did not want to go into All Pets Vet Clinic because it was still pretty hard on her so I went in. They made me wait 15 min. until all of the people had left the office before another vet came out. I told them that I wanted Bentley's records. She said they could not until I paid the bill. I told them that we assumed that might be the case. I told her that we were not going to pay it, and were advised not to talk to them, but we would be in touch within 7 days. I also gave them Mary's email address and asked the vet to tell Dr. Douchbag that if he wants to talk to her he should use that e-mail and not call her at work anymore with a snotty, condescending tone.
One of the advantages of working for a law firm is free legal council. I want to know if we should approach it like this: Tell them we will not sue their asses if they drop the rest of the bill. They will be getting off cheap, really. I think that just like when he carefully qualified what he said before, they don't want to let part of the bill slide because they would be admitting they screwed up and we would sue their asses. At this point that is the last thing we want. Mary paid part of the bill, but not others because they were mis-handled. If we wanted to sue them or just wanted to not pay, she would not have done that. We will see I guess.
Posted by brent at 6:11 PM No comments:

Give the female employee a definite day-long schedule of duties so that they'll keep busy without bothering the management for instructions every few minutes. Numerous properties say that women make excellent workers when they have their jobs cut out for them, but that they lack initiative in finding work themselves.
That is from 1943 guide to hiring women.
Posted by brent at 7:20 PM No comments:

Spent the day working on the walkway around the bottom deck. The mower crapped out and so I can't use the wagon to move a bunch of dirt out of there, and move the ton of good dirt I have in the back of the truck to the back yard. I have to change the elevation in some places and fill the new flower boxes. I can't get parts for the mower until Monday, so tomorrow is kind of a wash.

-Here is a very clever (and obvious) solution to an age old problem.

-Here is a site that will tell you things that are younger then John McCain. Isn't the net wonderful.

-Here is a video of a guy loading a bobcat into a truck. Does not sound hard, but watch how he does it.

-Well that did not take long.... Somebody made a rap re-mix with the Bill O' segment I posted earlier. I must admit I really like it.

Here is your dumb ass criminal of the day.

And here is another dumb ass.
Bill O'Reilly Goes Crazy - Watch more free videos
Posted by brent at 7:13 AM 2 comments:

There are a lot of ways to get out of jury duty. Here is the best one ever.
Posted by brent at 6:19 PM No comments:

If you are going to leave your Strat' in a taxi, then hope the drive is as honest as this guy. Oh, yea. It was a Stradivari, not a Stratocaster. About $4million bucks worth. Nice story.
Posted by brent at 3:42 PM No comments:

I have today off so I hope to work on the walkway and flower boxes on the lower deck. So I will leave you with a couple of more pictures of people being stupid. 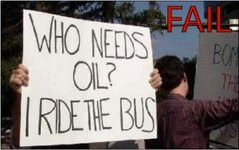 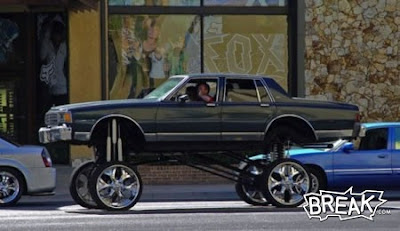 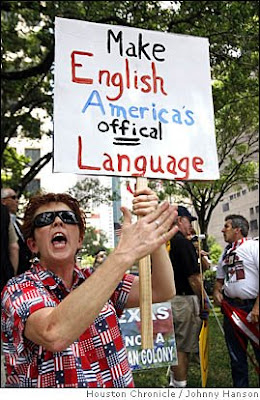 Well it looks like the "get a brain, MORAN" guy" that is shown in my profile (no, that is not me) has a sister.
Posted by brent at 1:03 PM 4 comments:

HERE is proof that you are insignificant.

HERE is a page full of stats compiled in real time. Pretty cool.

I am going to bed. I got over my flu thing and felt great for about 4 hours today when a massive cold set in. Ack.
Posted by brent at 3:50 PM 1 comment: